Welcome to the Department of Computer Science

Create challenging and cutting edge computing career possibilities by earning a Bachelor of Science in Computer Science or Software Engineering.

Students graduate with practical experience designing, building, testing and maintaining software systems. Graduates are in high demand. The department has maintained 100% placement in well paying positions for over 10 years. Check out the rest of our website to learn more about these ABET accredited programs.

Jacob has had two internships with NorthWestern Energy (NWE), first as an applications technologist and second as an applications dev ops technologist. The first internship was stationed at NWE’s main office in Butte, MT during the summer and fall semester of 2019. He was involved in a variety of different types of projects. His biggest project had him develop an online safety reporter in the form of a website for use internally by NWE employees. Another note-worthy project involved transferring data from CSV files to an SQL database, then using SSRS to generate reports from the data. Jacob’s second internship, which was during the summer and fall semester of 2020, had him working on robotic process automation (RPA). Throughout the entire internship, he developed a single large bot for the credit group of NWE all while working remotely from home. The bot is meant to automate a daily, repetitive process which the credit group spends over 800 hours a year working on. Jacob’s time with NWE has provided him with valuable memories, friends, and experience that will serve him for the rest of my career.

During the summer and fall of 2019, Eli interned at OPeNDAP locally in Butte. His duties centered around the analysis of Google Cloud functions. The company was unsure whether they wanted to pursue serverless computing via Google or Amazon so Eli was brought on to help inform their decision making. This was an internship that valued independence and self-direction. Eli had frequent meetings with the team, specific team members, and his direct supervisor to ensure the information he was generating was valuable. Eli was given complete open-ended authority as to how to approach each situation. As a result this internship was very creative.

Above everything else this internship taught him the value of communication and flexibility. The faster Eli was able to show his work to his supervisor, the more valuable his work ended up being.

Marcus is a senior in the software engineering and computer science program. Due to COVID restrictions, Marcus completed his internship virtually. During the summer of 2020, Marcus Frisbee interned with Phillip Curtis and Bryce Hill, made possible by a SURF Grant.  Marcus was tasked with engineering software for a respiratory monitor that is being developed and compared to medically relevant standards for the detection of apnea and its source. This monitor is being developed to be less intrusive than the current relevant standards. In order to verify data sets, a real time data logger and display was developed. The real time display allows for data from different sensors to be observed in real time in order to confirm that the data collected by the logger is meaningful.

Marcus used a C++ library called QT to design an interface for a Raspberry Pi 4. The interface on the Pi will allow the user to control the display of the data on three different graphs. This allows for flexibility in viewing the real time data and allows for the user to compare different data sets in real time. The data recorded can then be checked for collection errors in real time and fixed if needed. 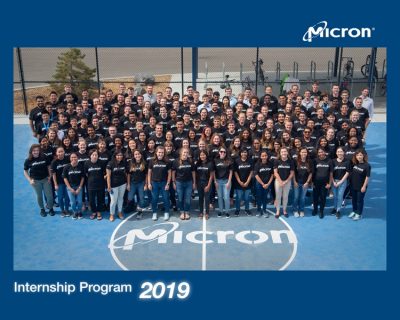 During the summer of 2019, Kaleb Bausch, a sophomore at Montana Tech, worked as a Front End Developer for Micron Technologies in Boise, Idaho

. He was tasked with working together in an intern cohort in a select group of interns from a variety of fields such as Data Science, Chemical Engineering, and Computer Science. Their objective was to use their combined knowledge to create the best website for Estimated Die Loss. This would be helpful and insightful for different departments such as DRAM departments, NAND departments, and Data Science departments when attempting to predict errors in silicon wafers before they occur.

Kaleb worked primarily in a framework named Omelek that was built off of Angular. He developed many new data manipulation web tools and different ways of displaying the data. He also worked to polish the webpage to work seamlessly and be user-friendly.

Kaleb enjoyed Boise with all its fun activities and developed many new friendships among the other interns.  It quickly became his favorite city due to the many bonuses of a large city while maintaining that small-town feel. He also specifically enjoyed the hot chocolate that Micron had to offer and allegedly drank around 9 gallons of hot chocolate over the course of the summer.

During the summer of 2019 Justin interned at Schweitzer Engineering Laboratories (SEL) at their headquarters in Pullman Washington. He had the opportunity to work as a software engineer working on the ‘Architect’ application that is used by power engineers across the globe. SEL makes its business by engineering protective relays for the power grid and Architect is the tool that is used to configure the settings for those relays. Apart from the actual work, Justin made some great friends at SEL at the various work outings with his colleagues and fellow interns.